Stevensons were a Scottish Plantation family who moved to Co. Tyrone in the 1600s. Robert Stevenson, bought the Linen Mill at Moygashel and turned it into one of the most technologically advanced mills of its time which included 15 houses for employees.

By 1901 a village of 28 dwellings had been developed at the mill, some of which are still in place today. 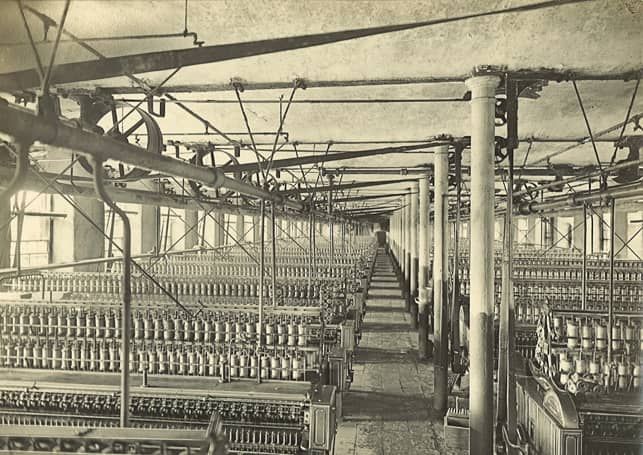 During The War Years

Stevenson’s became a limited company in 1907. By 1936 the Stevensons were aware that a European war would prevent flax imports reaching Moygashel and began growing their own supplies using Belgian seed.

Moygashel played an important role in both World Wars, as an employer and as a manufacture of essential materials like parachute harness straps, gun coverings and hosepipes. Finer yarns were spun as ‘aero linen’ which was fitted to the frame of fighter aircraft like the de Havilland Mosquito.

Moygashel Ltd was bought by Courtaulds in 1969 who sold it to Lamont Holdings in 1980 before it was transformed into The Linen Green, Ireland’s 1st village style luxury fashion outlet in 2000 by Moygashel Community Development Association Ltd. Since then the Linen Green has established itself as one of Ireland’s premier shopping locations with over 30 independent high end retailers.

The Linen Green’s unique Linen Mill heritage is still clearly evident in its use of names for each of the blocks of shops including The Framehouse, Warehouse, Workhouse, Bleaching Sheds, Dyehouse, Weavings Sheds and Cloth Loft. It also hosts a small exhibition of Moygashel Mill artefacts which is earmarked for development next year. The current exhibition includes photographs, mill tools & machinery, letters, material samples, products and office log books which are currently displayed within the exhibition Centre.

To get the contact details for individual stores just go to our home page called stores and click on the logo of the store you want to contact.

While some of our stores are currently open as normal between 10am - 5.30pm Monday - Saturday, many are offering a daily click and collect service.